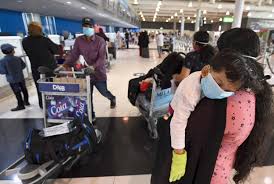 Centre for Indian Migrant Studies Working People’s Coalition (WPC) Report Background Covid19 pandemic had a huge impact on the health, livelihood, living and working condition and income of workers and employers globally. The labour migrants are one of the most vulnerable sections of workers, largely part of informal economy during the pandemic. India experiences large-scale movement of migrants internally and internationally. The common feature of both internal and international migration in the Indian context is the gross labour rights violations, such as wage theft, lack of access of social protection, right to association & collective bargaining, occupational hazard, precarious working condition experienced at various stages of migration. The majority of the low-skilled workers in the destination countries & and the daily wage labourers in Indian cities are employed in the informal sector. Hence, the consequences of lockdown measures in the country and other major destination countries have led to an unprecedented migration of workers and families from destination countries to India and also from large urban centres to rural India. In the international migration context, the mobility restriction and massive job losses during the covid19 pandemic demanded the countries of origin to bring back their citizens, especially temporary labor migrants. India, the home of 9 million cross-border temporary labor migrants, carried out the largest repatriation exercise from May 7, 2020, to bring back the stranded migrants. India brought back the migrants in 10 phases under a mission titled 'Vande Bharat Mission.' Even though the Indian government addressed the immediate requirement of repatriation, the government failed to understand and recognise their post-arrival grievances, like back wages, social protection etc. Recently many workers were deported from middle -east region, due to their demand of accessing living wage and right to collective bargaining. This